The museum landscape in the in the Black Forest 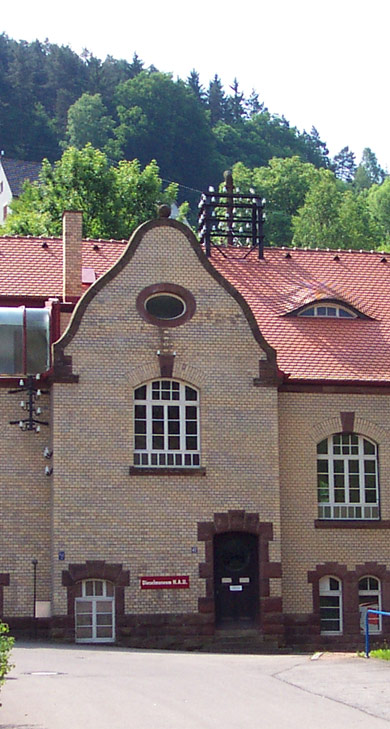 The Diesel museum Behind the facade of an art nouveau mansion of exquisite architecture a technical sensation is hidden that nobody would presume there: The biggest diesel engine from 1911. For more than 50 years it supplied the Hamburg-American Clock Factory (H.A.U.) with electricity and compressed air. It is completely preserved with all its components and sits in its original site.
Dieselmuseum

The Building Today the art nouveau building from 1904 is a cultural monument. Originally planned as a transformer station, it was enlarged to become a diesel power house in 1911. The building also contains a photo studio and a photographic laboratory, which were necessary for making advertising photographs of the products. The building was restored in 1995.
The Architect Phillip Jakob Manz Philipp Jakob Manz (1861-1936), the son of a worker, was a selfmade man, who had become a pioneer of industrial architecture. Several buildings on the H.A.U. area were designed by him. The windows that Manz had installed were made of bullet-proof glass. They were innovative in so far as they paved the way to insulation glass, which was developed as a direct result.

The Jugendstil (art nouveau) building, designed in 1904 by the renowned architect Philipp Jakob Manz was a transformer station for the "Hamburger-Amerikanische Uhrenfabrik", abbrev. as H.A.U.. It houses nothing less than a technological sensation: the largest diesel engine from the time before World War I. It is still completely preserved with all its components and sits in its original site.

In the diesel museum you can witness the exciting dialogue between charming poetical industrial architecture and the sheer power of four cylinders with a piston stroke length of 60 centimeters each, and a total cylinder capacity of 340 liters. A thrill to behold!
Thus the Diesel Museum, as it were, is a complete artwork, a cultural monument of great importance and it is correspondingly listed as such by the Historical Monuments Protection Authority.

Photographs, well preserved historical documents, and original accessories together with the impressive diesel engine offer an imposing overall picture of H.A.U.’s power station. Moreover, you can see electric control units from the beginning of the 20th century in the high voltage room, which is actually used by the exhibition.
The building was very carefully and competently restored and has become a gem within the industry and business park H.A.U. in the Black Forest.

The History of the Museum
The H.A.U. (Hamburg-American-Clock Factory) used to be one of the biggest employers in Schramberg. In 1924, about 2,200 employees produced about 5,000 clocks and 15,000 alarm clocks per day. The Black Forest town, once a poor market village, had become a booming industrial center. The Junghans clock factory, which has had its manufacturing site in Schramberg ever since, was the world’s biggest timepiece producer in those days.
Yet, very difficult times were to follow for the German timepiece industry. Competition from abroad, the US in particular, became stronger and had its impact on the H.A.U.. Efforts were made to contend with this development by rationalizing the workflow, adapting to the American competitors’ method of production and co-operation with local competitors. In 1930 the H.A.U. merged with the Junghans factory and the United Freiburg Clock Factories to become an incorporated company as “Uhrenfabrik Gebrüder Junghans AG”. Suspension of staff and closing of production areas followed. Much of the H.A.U. Company’s production site lay idle after the crisis.
One of the impressing company buildings houses the timepiece and car museum “ErfinderZeiten”. The windows of this listed company building impress with their elaborate design as well as their valuable fittings and panes. The history of technology has become alive again in this historical and authentic place of Schramberg’s industrial development.

The Site – A Place Where History Lives On
The site of the museum is full of history. Between 1875 and 1925 clock manufacturers Paul Landenberger and Philipp Lang had impressive company buildings erected here – today listed as historic monuments. The H.A.U. was a kind of signboard at the town’s outskirts; the buildings were partly designed by Philipp Jakob Manz, the leading industrial architect of the time. Factory buildings, the diesel power station and the factory owners’ mansions formed a group of buildings in urbanistic harmony.
Scholars concerned with local history regard the buildings as witnesses of Schramberg’s early industrial development, which are worth preserving.
After the second crisis in the clock and watch industry in the 1070’s, many buildings lay idle. The industrial wasteland was about to decay, when, in the 1990’s, Schramberg’s town authorities, with support from Baden-Württemberg, decided to take steps for a fundamental rehabilitation of the site. The industrial facilities were partly demolished; other buildings were renovated for commercial use. The result was an industry and business park, which supports business start-ups on their way to self-fulfillment. Thus new life returned to the historically important site.

We use cookies on our website. Some of them are essential for the operation of the site, while others help us to improve this site and the user experience (tracking cookies). You can decide for yourself whether you want to allow cookies or not. Please note that if you reject them, you may not be able to use all the functionalities of the site.